Medicine has been stolen.

It has been hijacked. And we need to steal it back! Is it really that bad? We think it is much worse than people realize. For example, there are advances in regenerative medicine (where we are building our impact capitalist business, RHM) that are being confined and locked in to this hijacked model. And that will ultimately hurt patients and physicians seeking to make life better.

So, who stole it? Here is an initial culprit list (and in no way is this exhaustive):

Now, clearly no one group has stolen medicine by itself. It is more of a combination of all of them combined – a system-based theft.

The healthcare industry is over 17% of the Gross Domestic Product (GDP) of the United States and is one of the largest sectors of the American economy. Medicine, while part of the “healthcare industry,” is not the same thing as healthcare.

What is “medicine?” Is it science? Is it art? Most thoughtful people would come to the conclusion that it is (or should be) both. To truly treat patients well, we need both the science of discovery as well as the art of medicine. That is why the definition that we use for medicine is “using both science and art to help patients lives a better quality of life”.

So, let’s take a look at a chart (below) that shows where “growth” is occurring in the economic system. It’s a pretty telling graph and partly explains why costs associated with Medicine and Medical care INCREASED? 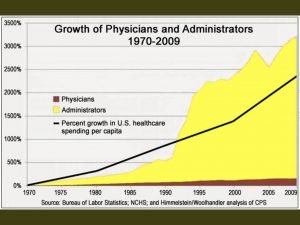 If, after looking at this graph, you still believe that Medicine hasn’t been hijacked, you are probably a hospital administrator, politician, health insurance company executive, or socialist who believes that the “rich” aren’t paying their “fair” share. (It’s almost as if we’re paying a ransom to the hijackers.)

If you are a physician that truly wants to help patients, this graph should freak you out.

It is not necessarily the fault of today’s doctor; but it is now their reality and responsibility. Unfortunately, many physicians have been complicit through the years.

Doctors have been incentivized, rightly or wrongly, to see as many patients in a day that he or she can. The doctor has been “institutionalized” in their thinking, whether they are in their own practice or employed by a hospital group.

The doctors who believe they have overcome the notion of being driven by the “almighty dollar” and work for an institution that pays them a salary have been incentivized by the “safety” of a salary. With this, the institution, knowing its fixed costs, drives the doctor to see more and more patients because the doctor, as “provider,” has to comply with the wishes of his or her employer.

From Physician to Provider

In the late 19th- and early 20th century, the efficiency movement gave rise to something called “scientific management,” as the demand for efficiencies in every sector of life increased. This was a big factor in the “modernizing” of scientific, medical, and engineering solutions.

This system gave rise to “medical corporatism…a corporate system of mass health care, organized as a vertically integrated hierarchy of relatively specialized practitioners and animated more by a managerial concern with collective efficiency than by the pursuit of patronage or individual competitive advantage.” (Sturdy and Cooter, pg 422)

There was a period in time where scientific management, or more specifically, looking at disease in the aggregate, was very important. But, as with many things, the pendulum has swung too far.

Seeing patients for 8 minutes or less may be an efficient way to see as many patients in one day as possible, but it is no way to truly care for patients.

Medical corporatism gave rise to the physicians becoming “providers,” or simply cogs in a wheel. Which has led many physicians to feel like a rat on a wheel in a cage.

While it may be an efficient way to run a business and collect data in the aggregate, it is definitely not the most effective way to practice the art of medicine.

The word Physician actually means “one who is skilled in the art of healing.” This does not describe a “provider”, who is tasked with seeing patients for less than 8 minutes at a time and just offering (or providing) approved treatments and prescriptions.

What is the solution?

We need to steal medicine back.

Let’s face it: the practice of medicine is at the intersection of science, art, and business. Yes, all three areas are equally important. 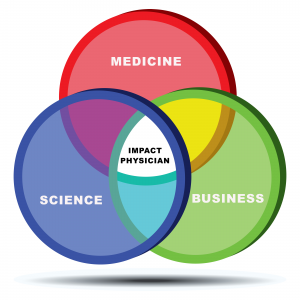 Therefore, the concept of Stealing Medicine Back has to do with a mindset of what the practice of medicine is, or what it can become. Everyone assumes that science and medicine go together; fewer and fewer people, however, believe that medicine and business go together.

But they do. Medicine and business do go together; but most physicians, throughout the 20th century (and now into the 21st) ignored the business of medicine; that’s how medicine was stolen from them. Yes, physicians were allowed to specialize, and with that specialization came an increase in incomes across all specialties.

But the current system is unsustainable. Unless physicians learn to do things differently, their incomes are going to start declining. It would be a surprise if, as a physician, you haven’t already felt the pressure from hospital administrators and insurance companies. The groups that stole medicine from physicians are now telling physicians that their incomes are too high.

These thieves of medicine are also telling physicians that they are now going to be responsible for patient outcomes, regardless of patient’s health or compliance to “doctor’s orders.” And if that’s not enough, compensation – and a doctor’s income – is being tied directly to these uncontrollable and ill defined outcomes.

Impact Physicians use business ownership to make a meaningful difference in the lives of their patients through the art of healing.

The Impact Physician concept is built on the Impact Capitalist (https://impactcapitalist.com) platform. And just like business owners, the vast majority of physicians want to work hard and add value to the lives of their patients.

At the end of the day, the Impact Physician platform is about helping physicians use business ownership to make a meaningful difference in the lives of their patients through the art of healing. This requires the mindset of profit seeking (for where there is no profit, businesses are cast off and lost in the dustbin of history) as well as helping others.

Regardless of what you may have been led to believe, seeking a profit is not evil. What is evil is when people seek a profit by alternate means. By not allowing for a true free market in health care, politicians and health insurance company executives are ensuring their cash flow outcomes. These are some of the biggest, phoniest, fake, and crony-capitalists there are.

Capitalism, as an economic system, isn’t evil. Sure, it can be exploited for evil, but so can ALL systems. The evidence, though, is that capitalism – true, free market capitalism – is the only economic system based on human behavior (real, not idealistic) and free choice; it is, ultimately, the free exchange of ideas, goods, and services.

Using business ownership and capitalism is good. And, almost counterintuitively, Free Market profit seeking actually brings about the most amount of good for society. It aligns economic incentives through competition.

In fact, purusing a profit is righteous, both in the scriptural sense and how a surfer uses the word when shredding an epic wave.

It is good to righteously pursue both impact and profit.

Like Impact Capitalists stealing capitalism back, Impact Physicians are stealing medicine back from those who have stolen medicine from them.

The Impact Physician platform has been built specifically to help physicians make an impact in the lives of their patients and a profit for themselves (in both time and money).

This is done through the art of healing, which is at the intersection of science, medicine, and business.

This is how physicians are taking control of their own future.

This is how physicians are stealing medicine back.

Membership has its privileges.

If you become an Impact Physician Member, you will have access to great information and resources to help you navigate the complexities of business ownership. And it’s free!

In addition, you’ll also be able to download the free eBook, A Unique Way of Thinking: Business Ownership and the Art of Medicine.

Click the button below to learn about becoming an Impact Physician Member.

What does an Impact Physician believe?

An Impact Physician believes in these core principles

Where do I begin?